What is a think tank?

Think tanks are often where the research originates that media then condenses and reports on.  So if you're leary of the media, rather than going to Facebook or Twitter, pick a think tank as your source of information! 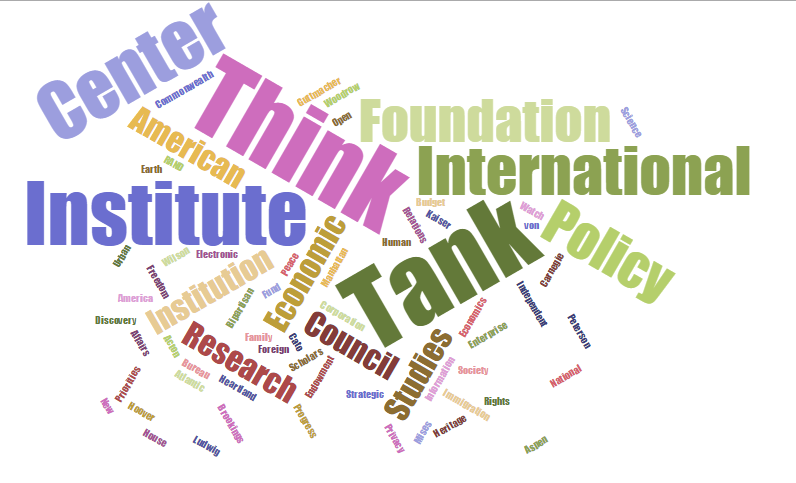 A think tank is a place that nurtures and assembles multiple scholars/writers who have or will develop independent reputations for saying novel, compelling or authoritative things across multiple areas of public concern.  Matt Bennet, VP for Public Affairs, Third Way

“Think tank” is a broad term, sweeping up everything from quasi-academic institutions like Brookings to politically engaged organizations like Third Way and the Center for American Progress on the left and the Heritage Foundation on the right. The scholarly think tanks are essentially universities without students – they have senior academics producing scholarly materials. The more action-oriented places do products that are intended to have an impact on actual legislative and political debates. (From Think Thanks 101.)

But can we trust think tank research?  Some analysts note that think tanks, which are often funded by individuals and/or foundations, start with a conclusion that they then try to support with selective research.  The think tanks then pursue research that will support that conclusion. If you're interested in reading more about this situation, take a look at the page in this guide entitled Confirmation bias.

Nevertheless, media articles are often based on think tank research, so it's important that we read the original research (from varying perspectives) to understand how conclusions are being drawn.

Think tanks listed below were taken from material found at:  http://think-tanks.insidegov.com/InsideGov